We allowed the child to understand what is an addition, with the great addition. He worked the first Seguin’s table, and now knows the numbers 10 to 19. It is time for him of working on memorizing the addition operations. By a series of steps, he will acquire the reflexes allowing him to find simple results, quickly, without requiring a classical operation technique. It is a kind of "global computing" (compared to the 'look and say' method of reading) that will help later to calculate faster. This can be compared to how we learn the multiplication tables.
We can provide the child with a book that will follow him throughout these learning. During these steps, it is question of control charts, fingers charts filled, cut or simplified ... vocabulary needed to understand what it is. The photos will help you find your way.
The sequence of these steps takes a variable time depending on the child, but this shouldn't last over one year and a half. It is interesting to propose this exercise before the child reaches his 6 years old, so it is still in the absorbent mind - and it is printed so deeply in him.

STEP ONE
The child uses the addition table and the red and blue lines. He has a book of nine pages on which are written the 9 addition tables, with no results. It copies the tables in a book, using the material to find the result, and corrects the control chart No. 1. 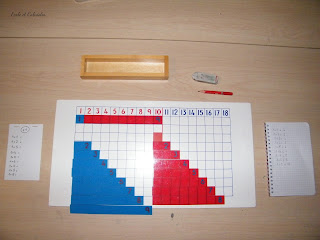 STEP TWO
Always with the addition tables, but this time by choosing cut combinations. The child writes the operations chosen, finds the result with the material, and always corrects with the control chart No. 1. 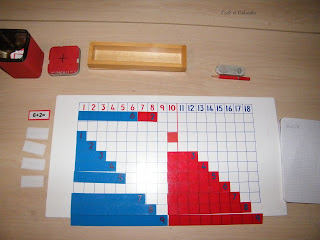 STEP THREE
The child works the equalities with 10. By positioning the bars, this creates a symmetrical set what will mark the child's mind. 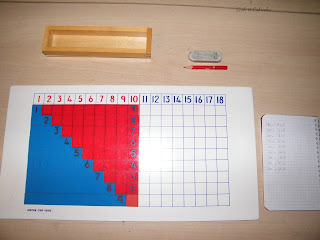 In this same step, we will point out to the child that certain combinations are equal: together we are going to hide on the table all combinations of control "unnecessary". We will obtain the control table No. 2, simplified. It is now with this table that he will control his work.

STEP FOUR
My child assembles identical figures. He will get again a symmetrical assembly allowing it to make some logical connections. 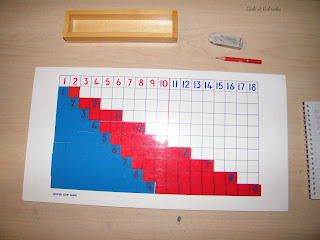 STEP FIVE
Once again, as the child take cut combinations, he writes them on his workbook. It works this time with the fingers charts filled, and he corrects himself with the control chart No. 2 (simplified). 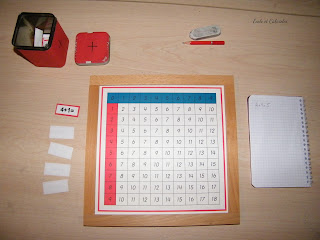 STEP SIX
With the cut combinations, the child does again the same work, but with the help of fingers charts divided. A little manipulation is needed to fully understand how to find the result. It always corrects the control table No. 2 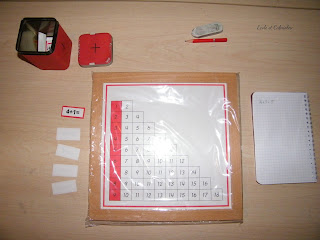 Two videos to understand how to read a result:

STEP SEVEN
This time, the finger charts is divided and simplified: only the results will ultimately appear. The work is always the same: pick combinations, write them on the notebook, find the result with the fingers charts (the child already knows several results by heart), and control with the control table. 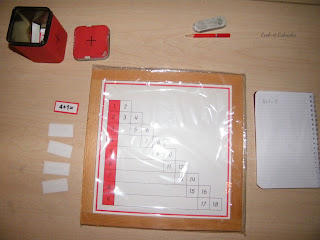 STEP EIGHT
The fingers chart is empty. As the child chooses five combinations, he writes them in his notebook. He finds the token corresponding to the result, and places it on the fingers chart non-filled. He corrects with the fingers chart filled. We can fix the chips with a kind of fixing pulp, so that his work can be done over several days. 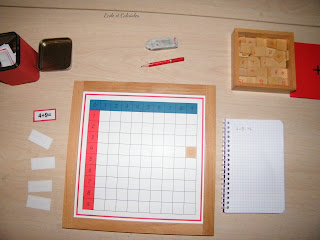 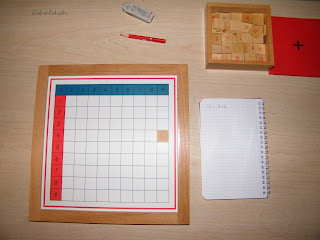 STEP TEN
The material is the same as for the step nine. Except that this time, we helps  the child to choose all the token indicating the result 10, and to place them on the fingers chart non-filled. He will discover some things well. It will continue the work in each time taking all the chips showing the same result, and will complement the entire chart. 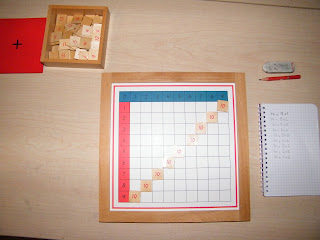 STEP ELEVEN
The child works the particular combinations, which will prepare operations with holes and later functions. 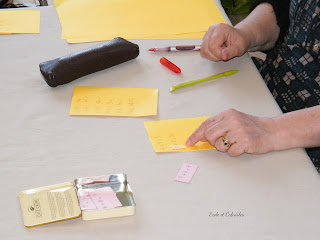 STEP TWELVE (the last one !)
Now that all these steps are done, the child should have so often used the combinations that he knows by heart the results. We will help him to work to discover small problems, in order to put in action the knowledge gained and to associate them with something concrete.